I have been wanting to do a run through Bryce Canyon for about six months now. About a month ago I decided on a date and a plan and started soliciting friends to come along. As usual, I had to do it on a weekday, so that made finding partners tough, but my friend Scott who I do a lot of adventures with was able to join and up for the task. The goal would be to run all three of the main back country trails in Bryce Canyon National Park. We planned to begin on the South end of the park where elevation is highest and run north where it is the lowest, allowing for a net loss overall. Below is a list of the trails and their respective mileages.

We drove down Tuesday night and stayed with a friend who lived in Panguitch. He graciously drove us out to Bryce at 5am to the start at Rainbow Point so that we could leave our car at the finish at Fairyland Point. By the time we got up there it was chilly, but clear and beautiful and about 45 degrees. We were off and hitting the trail by 6:30am or so. 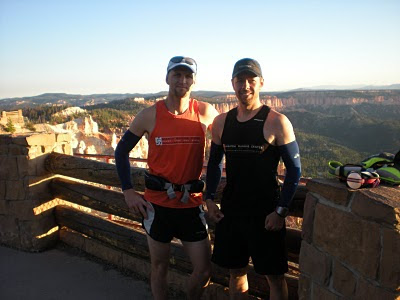 The first four miles are a massive descent down and past Yovimpa Pass to Riggs Springs campground. Along the way we passed two hikers near the top and a tent at the campground. It was still quite early, but I kind of thought we’d see more people. After Riggs Springs we started the ascent back up to Rainbow Point, a grueling 2200 vertical foot climb over 4 miles back to nearly where we started. Much of the trail was actually runnable, but I was quickly leaving Scott behind so I decided to walk several of the sections. I also figured I had a ton of miles ahead of me and it wasn’t worth pushing it. Even with the spots of walking I got to the Riggs Loop / Under the Rim branch 10 minutes ahead of Scott. I was 8 miles in and felt great, like I was just warming up even though I had nearly 5000 ft of elevation gain and loss. 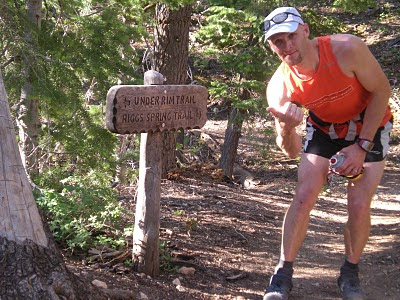 When Scott showed up we took a few quick pictures and were off again. He was feeling pretty good at this point and we really enjoyed running down the spin heading into the starting ‘flats’ of the Under the Rim trail. After we cleared the ridge we found ourselves in beautiful Bristlecone forest, running through trails that crossed dry riverbeds and over many fallen trees. I got to our first water stop at Iron Spring, mile 11.6 in about 2.5 hours, a little slower than I wanted, but not bad overall. I had set the goal to do 5 miles an hour, but that would turn out to be a pipe-dream. I again had to wait for Scott for about 10 minutes. I think he ran into some issues with his hydration pack and had to re-situate some stuff, not knowing how close he was to our first stop. It was a short stop, drawing water from a clear stream and purifying with Iodine tablets and nuetralizers. I tried to hold back on the pace, but somehow Scott slowed down even more and I quickly found myself alone again. What we thought would be a leisurely stroll over some rolling hills through the lower part of Bryce turned out to be a series of steep climbs and descents one right after the other. There was never a respite. And to make it worst, on most of the climbs the trail was soft beach sand. The inclines were very runnable, but with the sand even walking was tough. What I didn’t know was that not long after our water stop he started have Illio Tibial Band (ITB) issues and was in a good deal of pain. It was 7 miles between water stops and there were many of these difficult hills to go over, not to mention a good portion of the forest had burned a few years previous and was extremely desolate and it was starting to get hot. Scott would hit a real low point here. 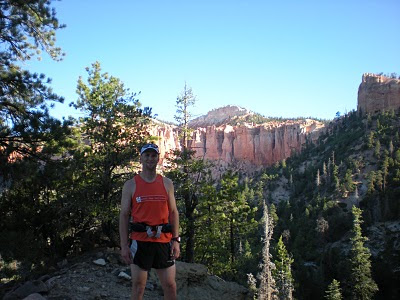 Our next water stop was at Swamp Canyon. It was a beautiful small running stream set in the lower part of a ravine and provided some needed shade while I waited for Scott. My goal of doing the run in 8 – 9 hours total was shot due to having to wait for Scott, so I would get to a stop, sort our my water and supplies, and determine what my normal stop would have been and then turn off my clock while I waited for Scott. I wanted to relatively accurately time ‘my’ run, but still be able to support and see Scott, so that I could help if needed. At Swamp Canyon (mile 19) I had to wait 40 minutes before he would show up. He commented that he was in a lot of pain and had some really low moments. He was determined to tough it out though and after a short stop we were off again.
The climbs over the next several miles were very difficult and hot. It was now about 2pm and we were in the hottest part of the day. Yellow Creek would be our next water source and it was over 7 miles away. Scott was carrying 70 ounces and I was carrying almost 60. As we would approach each water stop he would be completely dry and I would have only consumed about 40 oz total. I think this is a result of all the heat and hill training I have done over the last few weeks. The hills during this segment were particularly tough. I tried to stay as close to Scott as possible and would stop at the top of each hill to wait for him. My legs were feeling fantastic and I could power hike even the steepest hills very quickly. At the top of one of the climb Scott looked particularly bad, so he stopped to eat a gel and drink some more. I convinced him to eat something more solid a little lower down the trail and I think that helped. While I would wait I would take pictures, make videos, and was still having a great time. Well more than 4 hours into the run and I still hadn’t put my headphones on yet. 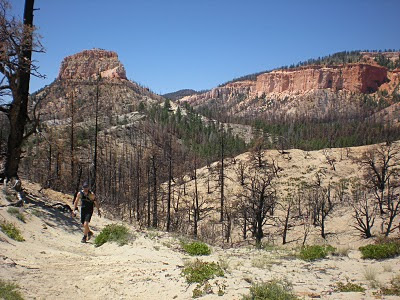 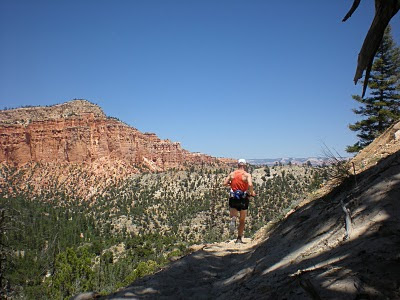 Scott made it to Yellow Creek about 10 minutes after me. I had done a lot better job of staying close to him and it was a good thing because I was pretty worried about him and his energy and knee. Refilling was a dream. This creek ran a little quicker and we soaked our head, hats, and shirts before leaving again. The next few miles around the bluff over to Right Fork of Yellow Creek were much more flat and only slightly rolling, but were also the hottest of the day and the least pretty since we were the farthest away from the actual rim of the canyon. I had warned Scott that after we hit Right Fork that the trail would get very steep and we would have to ascend more than 2500 ft in less than 3 miles. I don’t think he realized just how tough it would be. I, on the other hand, was having a great time. I felt awesome and was loving pushing the uphills. I did start to get cramps in my diaphram, just under my ribs. It actually stopped me dead in my tracks twice. But it was so beautiful I just couldn’t be too upset about it. I reached the Bryce Point (mile 31) at 7:30:00ish. All of a sudden there were tourists everywhere. 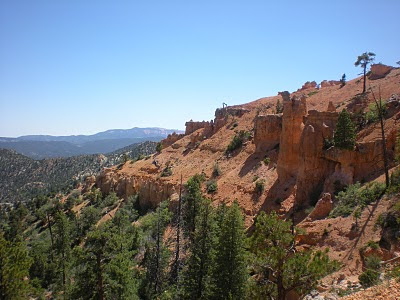 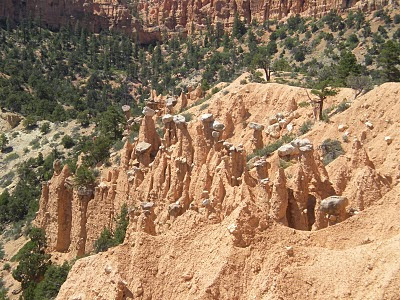 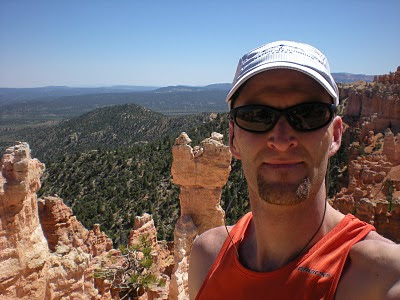 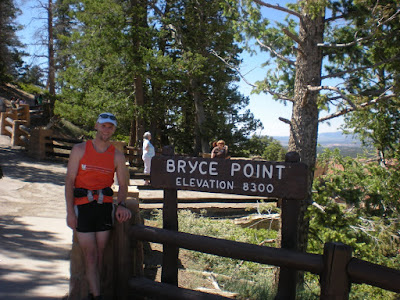 I sat down in the shade and waited for Scott. I had to bum some water off of a couple in a motor home who were from the Netherlands. They were very nice as water was not accessible at Bryce Point. I waited about 20 minutes and then walked to the end of the parking lot to view the incoming trail, but still no Scott. 15 more minutes and I checked again. This happened three more times. More than an hour had gone by and I was really getting worried. I strapped my waste pack back on and decided I better go look for him, but just as I made my way past the parking lot he came down the trail. He was very excited to see me . . . for a minute. I think he got his hopes up that he was finished and was very dejected when I told him we had at least 6 more miles to go. Yes, only 6, because I had given up on doing the lower Fairyland Loop and had just settled on the fact that we better do the Fairyland Rim portion because Scott just wasn’t going to make it through the elevation changes again. He was already 10+ hours into his run/hike. He had run out of water a ways back and was in dire need. I gave him any extra I had, knowing that we would have water available at Inspiration Point, just 1.2 miles ahead. He was very clear that he couldn’t run any more though and would be hiking it in. With over an hour waiting for him I couldn’t sit still any longer and explained how to get back to the car and I took off. I thought about refilling on water and doing the whole loop myself, but I was kind of checked out and just ready to call it a day at that point. I was only going to lose 2.5 miles overall, but would miss out on some of the best scenery. At least I would get to see it from the rim as I ran. It was then I decided to just go and not fill my water bottle the rest of the way. 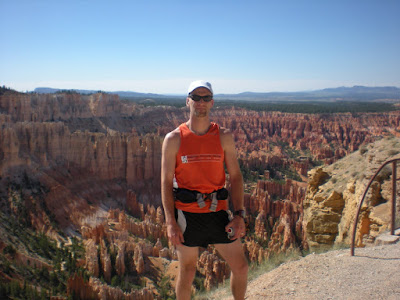 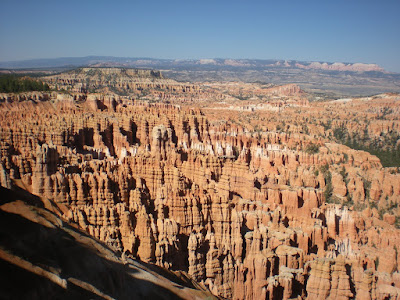 I reached the car at 8:31:17, exactly 37 miles from the start. I averaged a 10 min/mile the last 6 miles. It was a beautiful section of softly rolling hills with unbelievable views. I was laughing and singing the whole way to the car and having a great time saying ‘Hi’ to the tourists, most of whom were not American. I took some photos, made some videos, and just relaxed at the car while I waited for Scott. It would end up that I’d wait two hours for him to get there. He had to take a long stop for water and then got turned down the wrong trail by two pretty girls, a mistake any of us could have made. I’m really proud of him for sticking it out, even though he should have quit for the sake of his knee 20 miles earlier. He’ll pay for that one as he tries and recovers. He made it though and can now say he’s done his first ultra-marathon. He got to the car at 8pm and it was a dash to just get going. I wouldn’t get home until 12:30am. 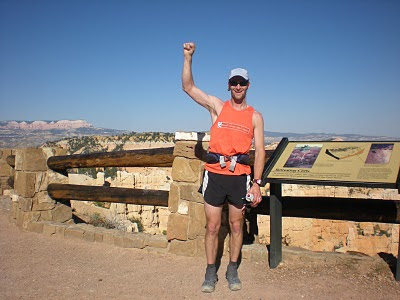 It was an amazing experience. Going back I think I could do the whole thing, including the lower Fairyland Loop, in about 7 – 7.5 hours. I can’t wait to take more friends on this wonderful adventure.