For 15 years Craig defined himself as a rock climber. In 2008 his wife convinced him to start running for better health. In January, 2009 he decided to start taking it seriously and began working out harder and more often. He also signed up for a few races. He is now more of a runner than a climber, focused specifically on ultra-marathons . He lives for the mountains, the solitude, and the adventure of being remote.

Matt was never a runner…never thought he’d ever be a runner. Started running as part of a means to losing weight, still never saw himself as a runner. Then one day after completing a 50K thought to himself – “I guess I am a runner”. Matt went from the “couch” to Ultra marathons and has found immense satisfaction in pushing limits and learning more about what really is possible.

Scott Wesemann
Scott has been an avid mountain climber and peak bagger for over 20 years with a passion for the Wasatch Mountain range. He enjoys easy hikes with his family, tough mountaineering routes and long ultra adventure runs with friends. He relishes the quiet solitude of a solo summit as well as the laughs and incredible times he has with great friends on the trails.

Josh struggled with addiction in his twenties. During this difficult time however, he gained an appreciation for the mountains through bow hunting. After reading a bow hunting book which talked about being in “marathon shape” to hunt in remote areas, Josh’s dad suggested they train for a marathon together. By replacing his negative addiction with a positive, he finished that marathon in October 2009, then fell into ultras shortly after. He hasn’t slowed down since.

A proud but sociable introvert, MVH would rather be alone or with a small group of friends in the mountains than at a crowded party. A die hard peak-bagger, MVH has hiked all over the Wasatch mountains of Utah and in 2010 transitioned from being a 165 pound hiker to a 140 pound ultra runner. In 2012 Matt finished Speedgoat 50K, Buffalo Run 100 Mile, and Wasatch Front 100 Mile Endurance run, as well as numerous long-distance adventure runs. 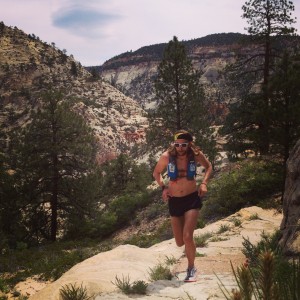 It started as daily jog around the block in order to lose weight. One year and 80 pounds later, Zac found something in life that inspired him. After running out of road, he found the trails and hasn’t given it a second thought. As a student, volunteer, husband, and working full time, Zac finds running to be an outlet that strips life down to its basic elements and allows him to connect with the peacefulness of nature. Don’t let his passiveness and approach to training fool you, his ego definitely enjoys a healthy competition.