It’s always difficult to know where to begin when trying to put into words the lifetime of experiences you go through during a 100 mile endurance event. However, I’ll do my best.

The Pony Express Trail 100 is held in the west desert of Utah. It follows the old Pony Express route that ran from Sacramento, CA to Missouri. The race is 100% roads, is very flat and very straight. It is also unique in that each runner has their own crew, no aid stations. My plan was to have my crew drive ahead every 4 miles and then stop and wait. If I started struggling I could have them reduce that distance, if needed.

I had the wonderful pleasure of having my brother, Brent, crew and pace me in this race. Joining him in these duties would be our mutual friend Ty Hansen, a solid runner and great climber. Brent and I pulled into the starting line at Lookout Pass camp ground on Thursday evening only to find out that Ty wouldn’t be joining us until later in the day on Friday due to some work conflicts that came up last minute. I wasn’t too worried as I didn’t need a pacer until after the 50 mile mark (or further). My real concern was that Brent was really wanting to get out and pace earlier then that, just to get the good miles in.

After a horrible nights sleep in Brent’s minivan we rolled out to a pretty uneventful race morning. Like many ultras there was little fanfare. We all lined up, a few jovial comments were shared, and the countdown began. We were off. As expected Jay Aldous (the eventual winner and new crushing course record holder) and Davy Crockett went out like a flash of lightning. I think someone forgot to tell them this wasn’t a 10k. 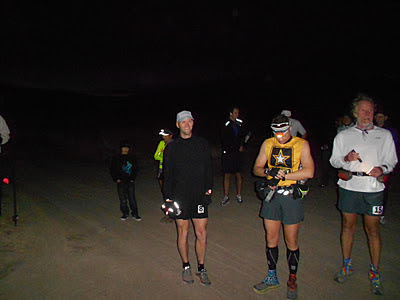 Waiting to start
There really isn’t much that can be said about the first 30 miles of this race. I felt really great, I ran a sub-4 hours for the first 26.2 miles, I passed Davy at mile 8 (I’ve never passed Davy, ever) and expected him to pass me at any moment during the next 20+ miles. I ran a lot of those first 30 miles with Kendall Wimmer, the eventual 2nd place finisher. He is a really great guy and I really enjoyed these miles with him. Together we were constantly amazed by how well we were running and the pace we were keeping. It was really cool. 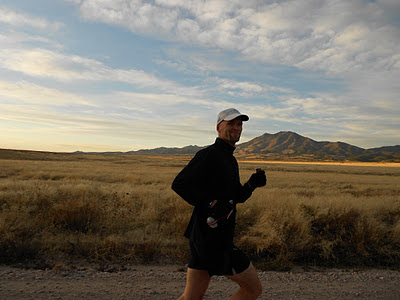 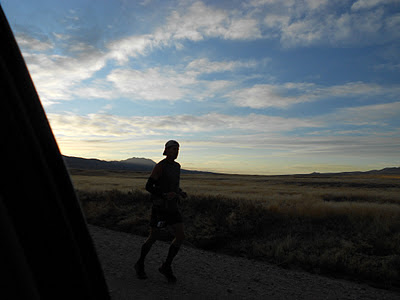 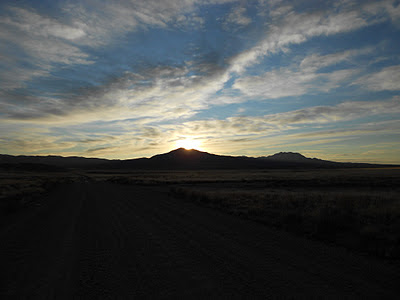 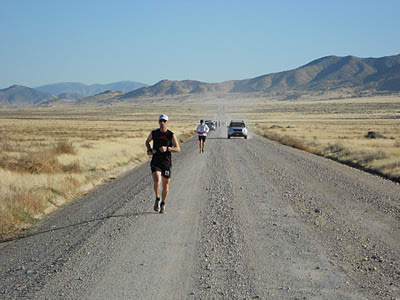 About mile 20, past Simpson Springs
Around mile 30 is when it started to get really hot. I had hit the 50k mark in a new best time for me at around 4:40. My legs were starting to hurt as they always do at this distance and the black shirt I was wearing (thanks Altra!!!) was soaking up the sun. The temps were only in the low to mid 70s, but out on those dusty dirt roads it felt like 85. I slowed my pace as I made my way up Dugway Pass, took off my shirt, and watched Kendall start to really put some distance ahead of me. The chances of catching him were dwindling. Still ahead of me was Jay and Phil Lowry also, both amazing runners. I was sitting in a solid 4th position, but I knew I had a couple of really good runners behind me – Davy and Tim Long, both who could pass me in an instant if I didn’t keep moving well.
On my way up Dugway Pass I met up with Mark Capone who recognized me as a fellow climber. Running/hiking with him really took my mind off my legs and it made the next couple of miles really fly by. At the top of the pass he kept going while I took a short aid stop. I flew down the other side of Dugway Pass (mile 37.5) and just cruised the next 5 miles down past the geode beds, finally passing Mark again at about mile 43. He was looking really good and would go on to finish his first 50 miler in 9:38. Congrats to him. I cruised into and past Black Rock Aid station (and the 50 mile finish), mile 48.5 (the 50 milers have to do a short out and back), without much else going on. I don’t really even remember much of that section. I hit the 50 mile mark in 8:14:49. I was hoping to get there at the 8 hr mark, but that 15 min wasn’t too much to add on. 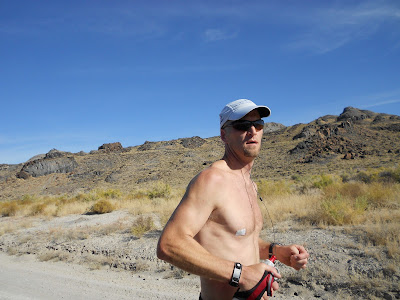 Yep, that’s tape on my nipple
It was now 3pm and Ty still hadn’t shown up. Brent and I were getting worried that he wouldn’t show or got lost. At mile 54 I finally passed Jay as he was cruising back from Fish Springs, now 10+ miles ahead of me. He gave me a high-5 and just cruised on past, looking like he wasn’t even tired. Amazing. A couple of miles later Brent was trying to get me to eat anything he could get down me and talked me into a bit of yogurt. BAD IDEA. The dairy didn’t take long to completely wreck my stomach and I would spend the next 10 miles trying to get over a yucky stomach.
Fish Springs is the turn-around of the race at mile 58. As we were coming up to the aid at mile 56 we turned around and here came Ty waving and screaming out the window. I had been a little down in the dumps and while Brent was driving along side for a short stretch to chat, I really needed a proper pacer and was just praying Ty would show up. His appearance was just the lift I needed.
The great part about this little section is that you get to see who is in front of you and how far they are ahead. We passed Kendall, who had passed Phil; he was about 2 miles ahead of us. Then, just before entering Fish Springs we passed a very down-trodden Phil who looked like he was hurting. It was at that exact moment that I knew I’d eventually catch up and possibly pass him. My stop at mile 58 was short and I turned around and started cruising with my ailing stomach. Once back at Ty’s car I told the boys to go drive it to Black Rock and see if someone would take it back to the finish line (which Matt Williams did, thanks Matt), so I had the next four miles or so to myself. At mile 62-ish I finally passed Davy. He had been dealing with the heat, race organization problems, and other things I can’t even imagine, but was pushing forward. He told me I wasn’t far behind Phil and had a good chance of catching him.
Brent and Ty showed up a short while later and we were back at our new pacing process – aid stops were every two miles where they would switch off pacing duties. It worked very well. We finally passed Phil at mile 67 and cruised into Black Rock aid at mile 68. My stop here was longer than planned, only because I saw so many friends I wanted to congratulate from the 50 mile race. Over the next 10+ miles we kept leap-frogging with Phil, to the point that I was tired of it and just let him go on ahead. I didn’t want to have to ‘race’ for 3rd place, I just wanted my sub-20 hour time. But as we were hiking back up to Dugway Pass there was Phil, sitting in a chair, not a half mile from the top. I had no choice but to pass him. I decided this time I would hit the other side of the pass and try and put some distance between us, hopefully for good. 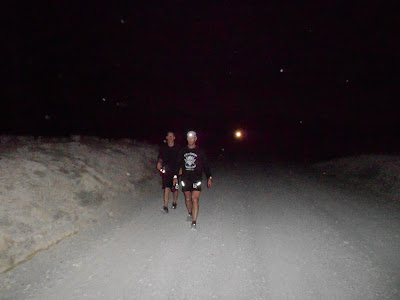 I think this is coming up to Dugway Pass
Once back to the ‘road from hell’ and the long 18 miles straight stretch back to the finish line I could keep a relatively good eye on who was behind and guess at how far they were. I was pretty certain I had a decent lead on Phil, but I wasn’t sure where Tim Long was as his crew was still passing us every now and again. That could mean he was 2 miles back or 5, we had no idea how to tell. By this point, mile 80+, all I wanted was to have it over. I was still having fun, but my legs were wrecked and I wanted to get out of the dark cold. I was able to maintain an OK shuffle with periodic walking spurts put in. Our 2 mile aid stops were very helpful and I was able to keep them super short. Other than Black Rock I never had an aid stop over 5 min, and I only had two even that long (Black Rock was 9 min). Brent and Ty were awesome at keeping me going.
Hiking out of River Bottom I could see a headlamp not a half mile behind us. Since it didn’t stop at Tim’s crew car I assumed it was Phil, and he was gaining. With only 8 miles left we were now back to a race for third. I continued to stick with my game-plan and just hope it paid off. With 4 miles left we had a long 3.5 miles of uphill and a half mile of downhill to the finish. Someone passed me and told me Phil was less than a half mile back and running ‘like he wanted it’. Something clicked in my head and I just took off. I was now running a 9 min/mile pace uphill, 96+ miles into a race. Brent was pacing me and struggling to keep up. When Ty took over for the last two miles I didn’t even stop at the car and just kept running. Ty did his best to keep up, but said that I even dropped him near the top. His positive words of encouragement were incredible as I ran up to the car at the turn-off to the finish where he hopped in to drive down with Brent to take photos and video. I knew I had 3rd in the bag and was looking at a time well below 20 hours.
I crossed the finish line with my boys and only a few race staff in attendance. It was weird to not have Davy there to welcome me in, but he still had work to do. I finished my third 100 mile endurance race in 19:18:05, good enough for 3rd place overall. 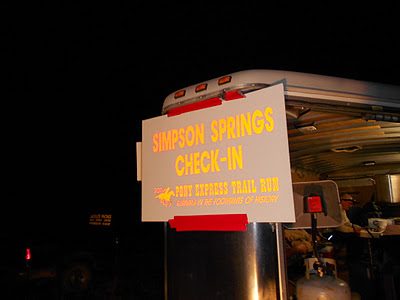 The finish line at Simpson Springs 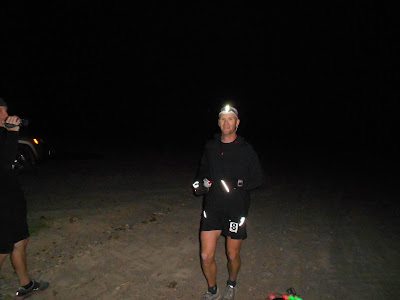 Me crossing the finish 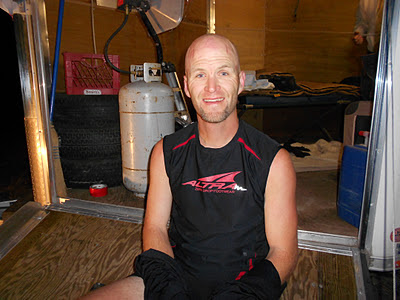 It was freezing, but I needed a pic wearing my Altra shirt. 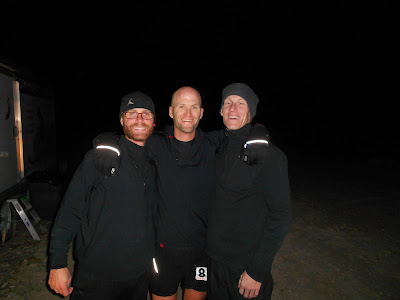 Brent, me, and Ty. What a crew!!!
First and foremost I want to thank my crew – they were absolutely amazing. I don’t know what would have happened without their positive words and encouragement.
Altra Zero Drop shoes make the best shoes on the planet. I ran 100 miles and never changed my socks or shoes. At the finish line I dumped out a little dirt and put them right back on for the drive home. They are the best.
And this will sound weird, but Brent, your chia seed energy gel is amazing. Absolutely amazing.