Is that my alarm or my ringtone? I immediately recognize it as my ringtone and know exactly who’s calling. Friend and running partner, Jennilyn Eaton, is attempting to become the first woman to complete the incredibly difficult Wasatch Ultra Ridge Linkup (WURL). I’ve only been asleep for two hours, but I’m immediately awake and talking her through a tough technical section about 2/3 through the course. I worry for her safety and have difficulty falling back to sleep.
4:30am, only two hours later, and my alarm is going off. It’s time to wake up and begin my own journey.
Matt picks me up in front of my house 15 minutes later and we are to Scott’s. 20 minutes later and we are all on our way toward Salina, UT, a remote and very small town in central Utah along I-70. After a quick stop to top off our gas tank Matt points his FJ Cruiser east and 8 miles later we are at our destination. One of the things I enjoy most about adventure running is the lack of fanfare at the beginning or end of the run and Friday did not disappoint. I gathered my things, said my goodbyes, high-fived the Mile 0 post and started running. My goal was to run a series of dirt roads representing Skyline Drive all the way to Highway 6, approximately 110 miles away. 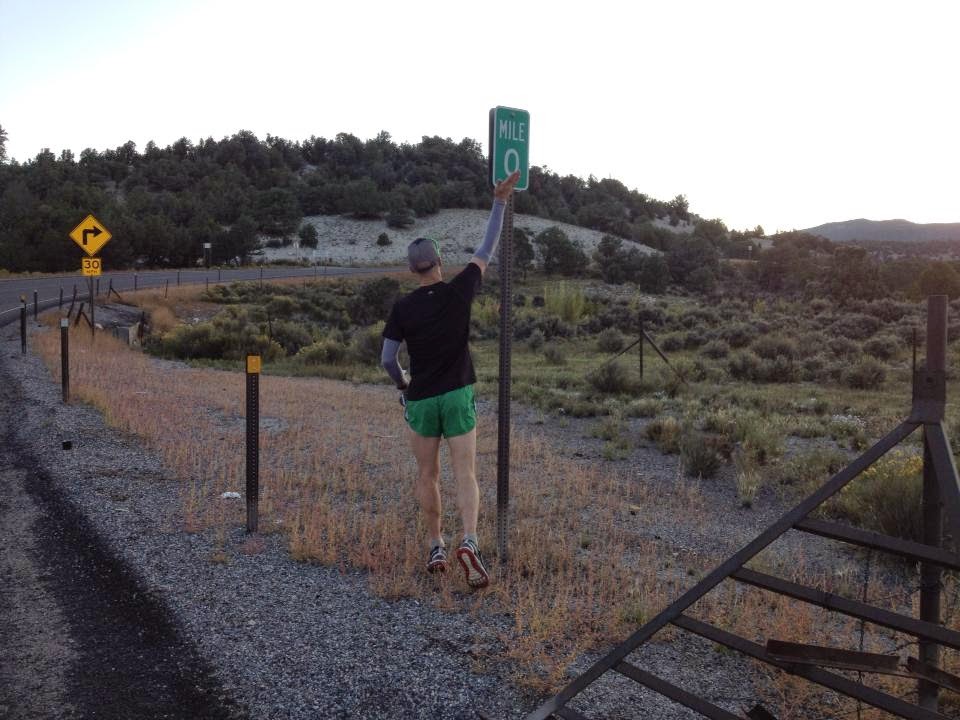 In 2011 I had attempted this same run with good friend and running mentor, Davy Crockett. We had attempted it nearly a month earlier following one of the biggest snow years in decades. After miles of thick mud we called it quits; me after 50 miles and he after 68. Skyline Drive might be a dirt road, but it’s no joke. Of the 110 miles 55 are above 10,000 feet elevation and 85 above 9,000. Acclimatized or not, altitude takes its toll. But with beautiful mountain vistas, wildlife, and pristine alpine lakes, this run isn’t about the road, it’s about every but.
After what has felt like a year and a half of runs and races not gone well, usually due to weather, I felt as though on this run Karma was smiling upon us. The forecast was for bluebird skies and mild temps. We couldn’t ask for a better day. During the day I sent Matt and Scott ahead 5 miles at a time allowing me to get by with carrying a single hand held water bottle and a few gels tucked in an Ultraspire Quantum. The miles flew by, some quicker than others. I hit a relative low point around mile 20 during a long 4 miles climb to my first break above 10,000 ft. After an extra rest at mile 25 above one of the most beautiful parts of the course I was back to feeling great and enjoying the solitude. Both Matt and Scott had run the Wasatch Front 100 the week before, so neither of them were in any shape to pace me. I was on my own, exactly how I wanted it. 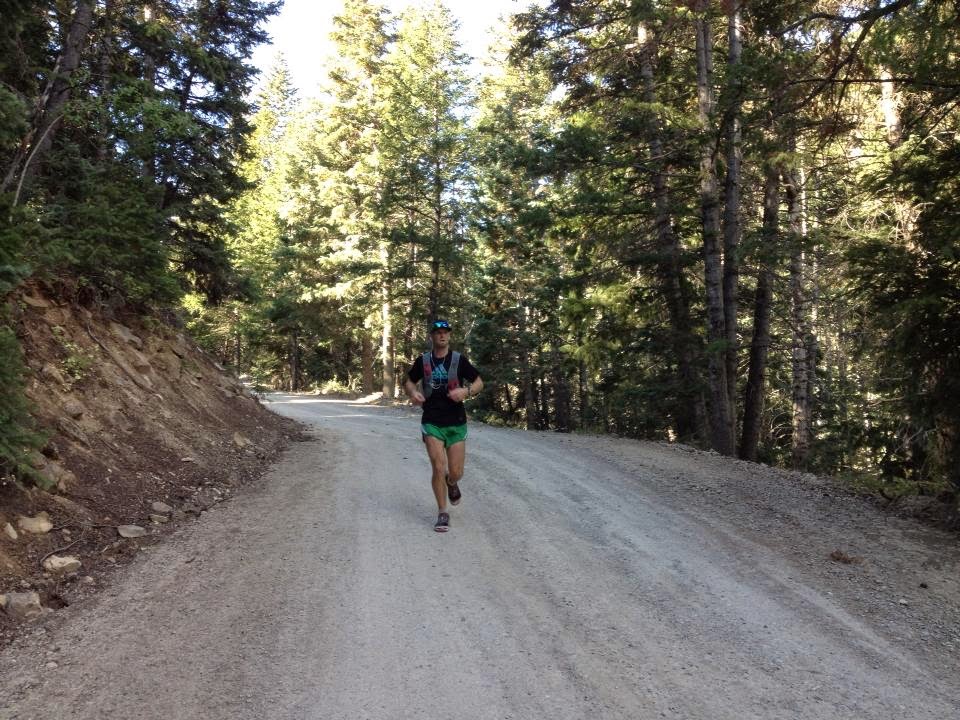 Only five miles later and I was at 12 Mile Campground. The next 2 mile climb would land me at the high point of the course, 10, 897 feet elevation. The next 10 miles or so are some of my favorite along the whole course. Wide alpine vistas give way to the San Rafael Swell to the east and glimpses of the southern Wasatch Mountains to the northwest. Wide plateaus offered a home to summer grazed sheep and cows, while hunters and campers cruised by on ATVs or in their trucks. I would make eye contact only long enough for me to see confusion register in their eyes as to why someone was outside of a vehicle and not carrying a gun (and in tiny green shorts). This was territory I was not accustomed to being in, and I’m not talking about my geographic surroundings. 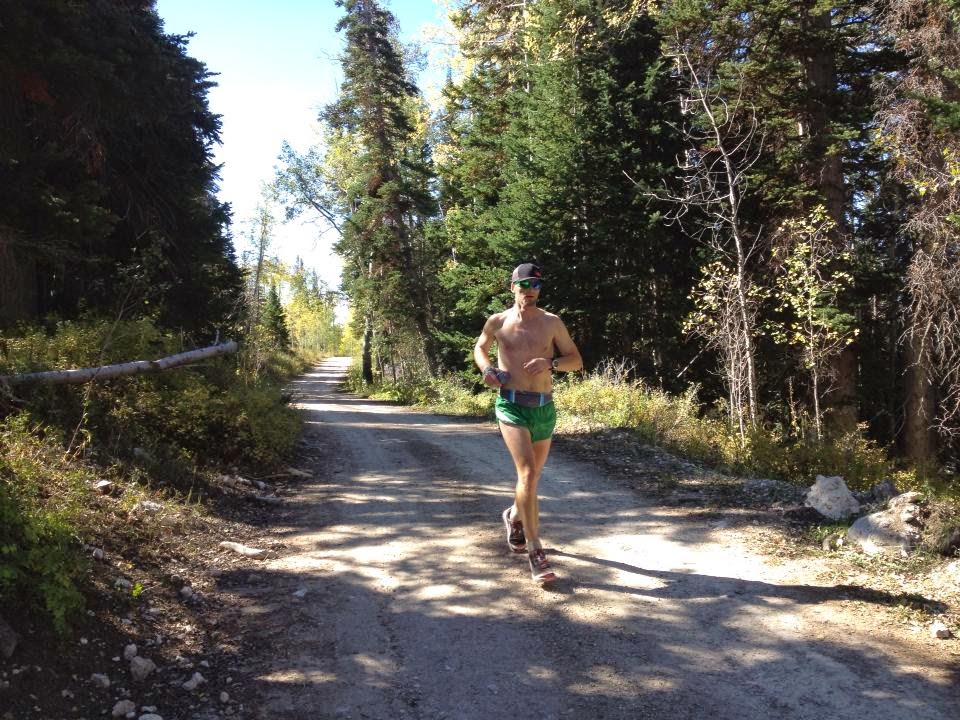 As daytime turned to dusk, so did my energy. I was now 55 miles into my run, the halfway point, and I needed a break. I sat in a chair eating potato chips and watermelon and contemplated running in strange mountains during the night. I know that wild animals abound in these mountains. Mountain Lions and bears are not uncommon. In the Wasatch I know what to expect and have no fear of the dark, but in a strange place so far from civilization and a crew car miles ahead I found myself trepidatious of the forest. As I wound my way through Ponderosa Pines and Aspens, near cliffs and large boulders, my mind started to play tricks on me and I would frequently spin around to look behind me, certain something was going to sneak up and attack. As time went on and the forest gave way to alpine plains, so did my fears. I found comfort in the darkness and companionship in the stars.
Climb after climb I pressed forward, always certain that I was climbing my ‘last major climb’. Each descent was met with another big climb. For a run that has only 12,000 feet of climbing it sure felt like it was more like 20,000. The night grew thicker and colder and my lack of sleep the night previous was taking its toll on me. Sometime around mile 80, after getting caught in a low point where the temps were around 35 I started to fall asleep while on my feet. I would for myself to run because it would keep me focused, keep me awake. The minute I stopped I would close my eyes and literally be asleep on my feet. I’d awake moments later in the weeds along the side of the road or in the middle of the road itself. It was hunting season and people were out on these roads, even at 4am, heading towards their favorite hunting spot. I got scared that if I fell asleep and wandered into the middle of the road a half-asleep driver wouldn’t see me and run me over. As dawn came around 7am my confidence grew that I would get my wits back. But the energy wasn’t coming back and I was stumbling around like a “drunken zombie”. I was determined to sleep, even if just for 15 minutes. As I came to my next crew stop, mile 99, I told Matt and Scott, “either let me sleep, even for 15 minutes, or I’m quitting”. They laughed at that because they couldn’t care less if I slept or not, they were there just to have fun, eat food, and listen to Katy Perry. They set up 2 chairs for me to stretch out in and let me sleep for 30 minutes. I woke up feeling fresh, hungry, and ready to run. Sleeping was a smart move. 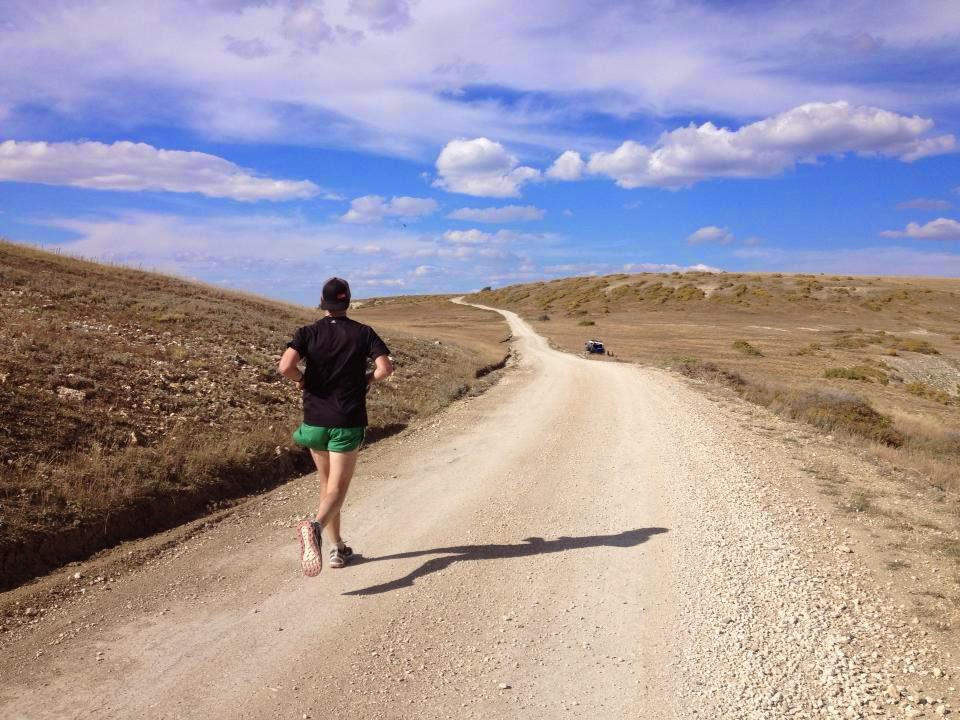 I had a big 2 miles climb in front or me, then rolling road across the last of Skyline Drive, followed by a long descent down to Highway 6. Part of me hoped the course would run short. Matt estimated it might only be 108 miles long. I hiked fast and ran consistently along the flats and downhill. I estimated the descent road would be approximately 5-6 miles long, so when I got to my last aid stop and was told I still had 5 miles left (I was already at 107 miles) I couldn’t do anything except shrug my shoulders and create new tactics for getting to the end – run for 2 songs then take a walk break. Run .9 miles then walk .1. Then, with only a half mile left I committed to running it in and doing it fast. Ok, I didn’t really have a choice, I had to hurry or my watch battery was going to die. Highway 6 came into view and I turned on the jets. I ran the last .2 miles at a 6:30 pace and as I came to the highway I made sure no cars were coming then knelt down and smacked the road itself.
I had done it. 112.5 miles and I had accomplished something no one else had ever done. It took me 27:13:09. I was hoping for about 24 hours and I think I could have done it had it not been for my reaction to sleep deprivation (not an excuse). I still believe it is a good time on a brilliant course. Most importantly, I feel like I finally got out of my 100 mile funk and had a good day. Sure, I had my energy lows, emotional lows, and stomach issues, but those are expected. Ultimately, I had a great day on my feet. I never had issues with my legs or an inability to run all together. When I needed to and wanted to I could run and do so well. I know I came away from this adventure with a renewed confidence in my 100 my abilities.
While the run itself is an accomplishment, it isn’t mine I cannot claim alone. Without Matt and Scott sacrificing their weekend to come and crew me I could have never done this run. I owe them everything and am incredibly thankful for their support and wit. Coach Schmitz will linger in my mind forever. Thank you fellas, I couldn’t ask for better friends. I would be remiss if I didn’t recognize my sponsors either. I ran in a pair of Altra Lone Peak 2.0s the entire run (except for 4 miles in a pair of Olympus, which I hated) and never had any foot problems. Additionally, Ultraspire for the amazing new handheld water bottle and Quantum 2015 belt. Simply amazing. I also wore the Revolution vest the last 55 miles, my favorite vest. Finally, I have to give huge respect to Gnarly Nutrition Boost. I can’t imagine running without that stuff. It gives me everything I need in an electrolyte drink.
Thanks everyone for your support and maybe someday I’ll even turn this into a race. It would be a good one.